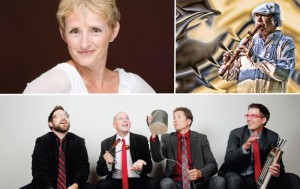 A commemorative musical-theatrical work for Canada’s 150th anniversary, This Land is a multi-media interdisciplinary work which opens a dialogue about what it means to be Canadian in 2017. Threaded together by the Indigenous Creation story, poetry from diverse regions and perspectives is set to music, illustrated by dramatic movement, and accompanied by visual projections of iconic Canadian paintings re-envisioned in real time. The performance will feature Anishinaabe storyteller and Ojibwa elder Rene Meshake reciting his own version of the creation story, called Aki.

This Land is something of a NUMUS all-stars event, bringing together mezzo-soprano Kimberly Barber, TorQ Percussion Quartet, harpist Angela Schwarzkopf, and many others.